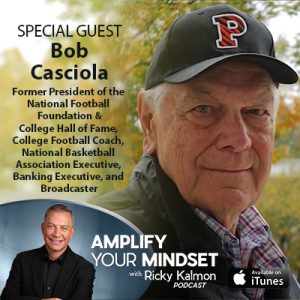 Bob Casciola is the former president of the National Football Foundation and College Hall of Fame. He is the author of 1st and Forever: Making the Case for the Future of Football. As the NFF President, he oversaw 119 chapters with 13,000 members throughout the country, The College Football Hall of Fame in South Bend, Indiana and The Foundation’s many educational and football related programs.  Selected All-Ivy League at Princeton University, where he played for Hall of Fame coaches Charlie Caldwell and Dick Colman, Casciola spent 20 years in the college coaching ranks as an assistant coach at his alma mater and Dartmouth College, under head coach and Hall of Famer Bob Blackman. He became head coach at the University of Connecticut in 1971, before returning to Princeton to lead the Tigers for five seasons.

In 1978, he joined First Fidelity Bank of New Jersey and rose to senior vice president, leaving in 1987 to become executive vice president and chief operating officer of the New Jersey Nets of the National Basketball Association, a position he held for five years.

Since his active coaching days, Casciola has remained active in sports circles in a wide variety of roles. For fourteen years, he coordinated the coaching at the nationally known Quarterback-Receiver Camp, was a member of the selection committee of the Garden State Bowl and served on the Executive Committee of the Kickoff Classic.

In 1981, Casciola became color analyst for Princeton football. Two years later, he was chosen to do color commentary for the New Jersey Generals of the USFL and was cited as a member of the best sports reporting team in New York State. In the fall of 1984, he became the “voice” of Rutgers Football on both radio and television on the New Jersey Network covering Rutgers, Princeton and the state colleges in New Jersey.

During the 1985 and 1986 seasons, Casciola served as color analyst for the Ivy League Game of the Week on National Public Television. In addition, his broadcasting career has included color commentary for the Mizlou Television Network, working the Independence Bowl in 1985, 1986 and 1987; the Hall of Fame Bowl in 1986 and the Senior Bowl in 1988. From the fall of 1987 through 1990, Casciola was color commentator for the Great American Independent Football broadcasts on national television that included the following schools: Boston College, Syracuse, Pittsburgh, West Virginia, Notre Dame, Temple, Rutgers, Army and Navy.

For his efforts with New Jersey high school football, Casciola received the Coaches Association Honor Award in 1981, and on June 5, 1984, was cited for his contribution to high school sports by the Delaware Valley Chapter of The National Football Foundation and College Hall of Fame and received the Distinguished American Award. He was also honored by the New Jersey Sports and Exposition Authority for his efforts on behalf of athletics in New Jersey and was named “Person of the Year” by the New Jersey Tournament of Champions. For his outstanding and significant achievements in college football, the Downtown Athletic Club honored him with a Heisman Scholarship Award in 1994.