With Over 16 Million Views! 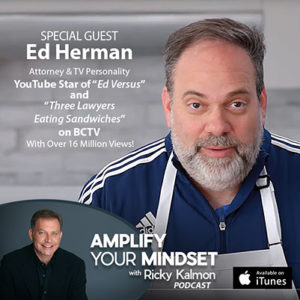 Ed Herman serves as a managing partner for the law firm Brown and Crouppen, one of the largest personal injury law firms in the Midwest. Ed has practiced personal injury and pharmaceutical law for over twenty years. He has been recognized by Superlawyers in 2017, 2018, and 2019. This distinction is reserved for the top 5% in the profession. Ed has appeared as a legal expert on television on over 400 occasions on programs such as Fox 2 News in the Morning, Great Day St. Louis, Show Me St. Louis, and Kansas City Live. He also serves as co-host for Taste and See Kansas City. He has been featured on WGN radio which broadcasts in 38 states plus Canada, as well as The Rizzuto Show on 105.7 The Point. Recently, Ed has turned his attention to digital content and stars in two highly viewed digital series, “Ed versus” and “Three lawyers Eating Sandwiches.” These videos have garnered over 16 million views in the ten months since the first episode was launched. Ed is a graduate of Washington University School of Law where he was honored for excellence in Trial Advocacy as the recipient of the William M. Pomerantz Trial Prize, the Milton F. Napier Trial Award, and the Lewis F. Powell Award.