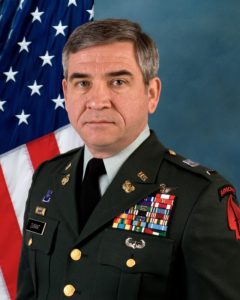 On October 3, 1993, while piloting an MH60 Blackhawk in Mogadishu, Somalia, he was shot down and held captive by hostile forces. He was released eleven days later. He is the author of the NY Times Best Seller In the Company of Heroes and The Night Stalkers.

Today, he credits his harrowing ordeal for his success in business and his personal life.

He is now the President and Chief Executive Officer of Pinnacle Solutions, Incorporated; an engineering and services company based in Huntsville, Alabama. He has a Bachelor of Science degree in Professional Aeronautics and a Master of Business Administration in Aviation degree from Embry-Riddle Aeronautical University.

In eleven years Pinnacle has grown from a home office-based startup to over 375 employees and more than 70 subcontractor personnel operating in fourteen US and international locations with major prime and subcontract efforts supporting the U.S. Army, U.S. Air Force, NASA and the U.S. Special Operations Command.

Ricky Kalmon delivers corporate motivational keynote programs that will change the way you live, work, and think.  His mindset motivational programs are inspirational and offer compelling, applicable tools anyone can use in personal and professional development. By “Unlocking the Power Within™,” he reveals how the subconscious mind can be the greatest tool in achieving new heights, reducing stress, increasing productivity and success. Kalmon will show you how to enhance your mindset to repel doubt and ignite your positive intentions. Ricky has broadened the scope of personal self-discovery and has taught thousands of people how to empower themselves and enrich their lives.