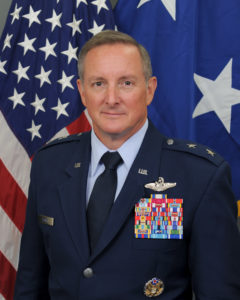 Special guest Retired Major General Stephen Clark. His last posting, was as the Director of Programs in Office of the Deputy Chief of Staff for Strategic Plans and Requirements in the Pentagon.

He led a staff of military and civilians in the development, integration, evaluation, and analysis of the Air Force’s $800 billion portion of the Department of Defense’s Future Years Defense Program, while maintaining the integrity and discipline of the Air Force Corporate Structure process.

He spent most of his service in the military’s special operations community, including several postings in the US Special Operations Command to include command at the squadron, group and wing level. His senior staff assignments in the Pentagon included two years as chief of Air Staff Contingency Operations, Plans, and Programs and as Special Operations Support Team chief at the National Counter Terrorism Center.

Major General Clark is a command pilot with more than 3,300 hours in 13 aircraft.  He has flown combat missions in Somalia, Bosnia, Haiti, Afghanistan and Iraq.

MAJOR AWARDS AND DECORATIONS include:

In this episode, he shares how mindset has helped him in his personal and professional life. He continues to lead and inspire others with a sense of purpose.