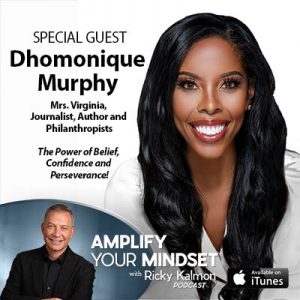 Dhomonique Murphy is a 3x Emmy Award Winning Television Journalist and the reigning Mrs. Virginia American. Dhomonique has appeared on stages across the nation and has been featured on The Steve Harvey Show, FOX, ABC, NBC, HSN, CBS and countless radio, print, and local television platforms.

Dhomonique is a published author of three books: A) RESET: Attitude is Everything, B) The Right Method Cookbook and a contributing author on the bestselling book: 1Habit for Entrepreneurial Success alongside Forbes Riley and Les Brown.