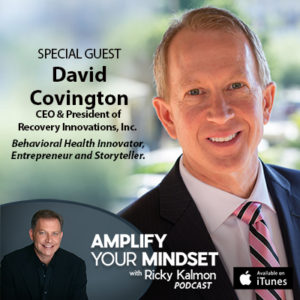 David W. Covington, LPC, MBA is CEO & President of Recovery Innovations, Inc. (d/b/a RI International). He is a behavioral health innovator, entrepreneur and storyteller. He is also a partner in Behavioral Health Link, and founder of the international initiatives “Zero Suicide,” “Crisis Now” and “Hope, Inc.”

A licensed professional counselor, Mr. Covington received an MBA from Kennesaw State and an MS from the University of Memphis. He previously served as Vice President at Magellan Health responsible for the executive and clinical operations of the $750 million Arizona contract. He is a member of the DHHS Interdepartmental Serious Mental Illness Coordinating Committee (ISMICC) established in 2017 in accordance with the 21st Century Cures Act to report to Congress on advances in behavioral health.

Mr. Covington is a two-time national winner of the Council of State Governments Innovations Award. He also competed as a finalist in Harvard’s Innovations in American Government in 2009 for the Georgia Crisis & Access Line, and the program was featured in Business Week magazine. Together with Stephanie Hepburn, Mr. Covington is also working on several books, including “Everything We Learned about Suicide was Wrong” and “The Dogged Pursuit of Innovation in Mental Health.”